[Nicole taught at the American Home from 1996 through summer 1998. Her second year she was the Lead Teacher. Since then she has worked as an English teacher in San Francisco, France, Switzerland, and now in Guinea. You can find more information about her adventures abroad at http://nicolemercer.wordpress.com Nicole’s husband, Fredrick Brun, is a manager specializing in road construction. They decided they wanted to see the world. This has included Saudi Arabia – where Nicole did not have a chance to teach – but did visit.]

When I entered the classroom, the children immediately stood up and without so much as a glance from the teacher began to sing in French, “Long Live Peace, Long Live Guinea, Long Live the President, Professor Alpha Condé…” They welcomed me with a “Bonjour Madame” and applauded. I looked into their sixty-five smiling faces and wondered: Now what am I going to do with you?

This was my first time teaching English in my Guinean village and the first time in my fifteen years of teaching experience that I was totally unprepared. I had not expected to get into the classroom so quickly, if at all. My husband had been working in a village in Guinea, about 800 kilometers from the capital of Conakry, for two months and I had finally been granted a visitor’s visa.

It was my third day in town. I had spent my first two reading and watching the Guinea fowl eating insects off our porch. Suddenly, mid-morning, my husband came home to say, “The principal is waiting for you at the school. You can give them a lesson today, but you have to go now.”

The secondary school teaching staff (all five of whom were attending in order to learn a little English themselves) told me that I had thirty minutes. That was more than enough time, as it turned out, for all sixty-five of them to master “Hello, my name is…. What’s your name?” “How are you?” “I’m fine.”
I have had “student sponges” before, absorbing every bit of information like drought-stricken plants. But these were vampires! How could they possibly have caught on so quickly?

Surely my half-hour was over? I asked if maybe that was enough for the first day.

“Continuez!” ordered the principal in French, the official language of Guinea and thus the language that all classes are taught in.

And so I did. For nearly two hours. “Where do you live?” “I live in Guinea.” “Where does he live?” “He lives in Guinea.” Every time I tried to stop, the students cried out, “Non, encore!”

Whenever the chalkboard needed cleaning, the student responsible that day raced to the front of the class, wet the sponge (a squishy yellow mass about the size of an American football) in a tin can full of water and a few insect corpses, and passionately erased.

Every child was fully engaged, eager to learn. No one spoke out of turn. If I asked a question, sixty-five hands shot up in the air. Whenever a student was called upon, she stood up and answered in a complete sentence. If a student answered with an incomplete sentence, one of the instructors listening in reminded her of the “proper way to answer a question” and sixty-four hands were back up in the air, begging to give their complete reply.

If a student gave an incorrect answer (as rare as an incomplete sentence), she was reminded that she was lucky to be in school, to have the honor of listening to a professor and thus of improving herself through education. A solemn silence would immediately fall over the classroom. There was a mixture of shame over not being better students and pride over the opportunities they had in their village. More than anything, there was a renewed alert attention.

I thought the classroom had been crowded, but by the time I was finally allowed to leave, there were fewer pupils inside than on-lookers congregated on either side of the building, taking advantage of the fact that the windows and doors of the school were nothing more than an absence of concrete, giving new meaning to the words “open to the public”.

The “auditors” outside included children as young as three and middle-aged women who had momentarily set their baskets of avocados down on the school steps. The women fluttered away faster than the Guinea fowl when the lesson ended, but the boys and girls, surrounding me, cried out, “How are you?” and “Goodbye!”

All the way home I could hear them shouting after me, “I’m fine!”

The next day, as I walked through the village, nearly everyone greeted me with “Hello. How are you? I’m fine.” (In Malinke, the local language, such greetings are often clumped together, and while it was easy for the villagers to pronounce and memorize the expressions, it was more of a challenge for them to understand that one was generally a response to the other.)

The following Monday, as my husband drove through a town located twenty kilometers from our village, children ran after his car shouting, “Madame Nicole! Hello! How are you? I’m fine!” His driver explained that several of the village children go to the town on the weekend to see family. They had apparently described to their friends the car that had driven their English teacher to school, and even when “Madame Nicole” was not in the car, it was now considered the English-mobile.

My students were avid learners who never needed a revision, but they were also avid teachers. Over the next two weeks, I discovered that not only my village children, but many of the inhabitants in the surrounding area had learned the members of a family, the objects in a classroom, the parts of the body and the animals in Guinea. Soon my husband’s French colleagues were complaining that they were going to have to take lessons too because everyone in the village wanted to speak to them in English.

The school instructors opted for group lessons in the late afternoon once their own classes were over, and soon had surpassed even my brightest former students in the speed at which they could learn English. I had never seen adults who were capable of integrating information so quickly and easily. They seemed to have both the analytical skills that come with age and a mental elasticity that I thought was intrinsic only to childhood.

How can the aptitude of my Guinean students be explained? Is it the fact that they all speak at least two languages, French and their native language Malinke or, for some of the teachers, Sousou or Peul? Is it their oral tradition and the fact that so much of their history is passed down in the form of story-telling? Or is it quite simply the fact that these people want to learn?

When I asked them if they were interested in studying English, they looked at me as if there was such a thing as a stupid question.

“Of course! English is the most important language in the world!”

“One must never refuse the opportunity to learn.”

“Knowledge is the most precious gift because it is the only thing that can be kept forever.”

Above all, for an Islamic Guinean village that had befriended its first white inhabitant only a few months prior and whose teaching staff was 92% male, I felt honored to have been trusted enough for these children to be placed in my hands. 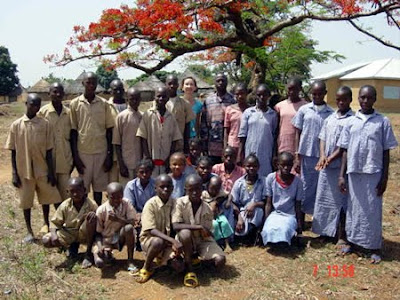 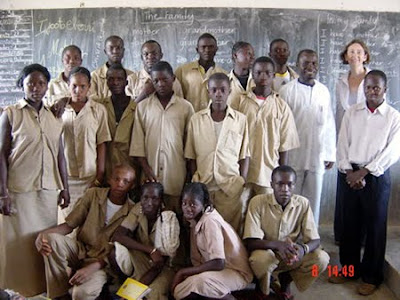