During March 2013 seven students from six American universities spent their spring break volunteering and helping others in two Russian towns, Vladimir and Murom.  In Vladimir, together with students from Vladimir State University, we cleaned up and dry walled parts of a new apartment purchased by the Vladimir Handicapped Children's Association Svet (“Light”).  The apartment will be used by young people with various disabilities who are learning to live independently.  The group in Murom worked at the Murom Institute, helping their Russian counterparts practice conversational English.  They also worked with the Institute faculty to prepare instructional materials for the English language program.

Aaron Bateman, who participated in the Vladimir project, has written a brief reflection about his experience.

The links below will take you to additional information, photographs, local television news reports and essays from some of the participants in our 2012 and 2013 ASB programs.

Now that I have been back in the Sates for some time, I have been able to reflect on my American Home-sponsored Alternative Spring Break trip to Vladimir and all the absolutely amazing experiences I had, including  the people I met. This was my second trip to Russia, but my first time visiting Moscow, Vladimir, and Suzdal. Three years ago I travelled to Kazan, the capital of Tatarstan, to study Russian, and I fell in love with the country, culture, and people.
When I flew out of Philadelphia for Moscow this past March, I was nervous but also very eager to go back to the beautiful and mysterious land that is Russia.
I remember looking out the aircraft window as we approached Sheremyetevo airport viewing the area surrounding Moscow covered by a beautiful blanket of snow. After we landed, it felt surreal walking through the new international terminal and quickly acclimating to just about everything being in Russian. Our program coordinator, David Johnson, a lecturer in Russian at Vanderbilt University, and the other American students participating in this Alternative Spring Break program,  Miya, Ariel, and Carissa, were a welcome sight.
Shortly after my arrival, we boarded a van and began the approximately 3 1/2-hour trek to Vladimir.
When we arrived in Vladimir, I must say I was a bit apprehensive because I did not really know what was in store.  The long trip had of course been tiring; plus I didn't know any of the people I was traveling with or any of the Russians we were about to meet.  However, when I met my host family, I immediately felt at home. My host mother had a hot cup of tea waiting for me, and she said to me in Russian that she wanted me to feel comfortable and completely at ease.
My nineteen-year-old host brother, Sasha, studies at Moscow State University. My first night in Vladimir he took me to Uspensky Sobor (Assumption Cathedral), and I must say that I was absolutely overwhelmed. It was one of the most beautiful sites I have ever seen. I felt like I had entered a time machine and travelled back 900 years.  I felt the presence of history in a way that I have never before experienced anywhere else in the world. 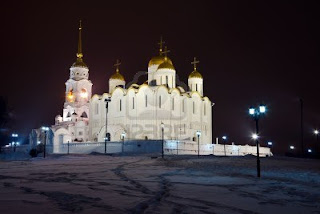 The next day the other Americans and I went to the American Home.  Since we weren't yet familiar with the city, our Russian host families showed us the way.  We were met by the Home's wonderful staff and some of the Russian students who had volunteered to spend the week with us. I can honestly say that the staff there really felt like family and treated us as such. They took excellent care of us.  This included the Russian language teachers, Tanya and Nelli, who were so patient and kind.
Shortly after arriving at the site where we would be providing our volunteer labor, we were put right to work . We hauled concrete, plastered walls, cleaned and even gave brief interviews for some local Russian TV stations. All in all, it was hard work, but a lot of fun. We had several “Russian breaks” that included tea and desserts; we also became acquainted with the Russian students who had volunteered to work with us, some of whom I still Skype with regularly. It was rewarding to see how pleased our Russian counterparts were to be working with us, and how we really seemed to have a positive impact in the short time we were there. 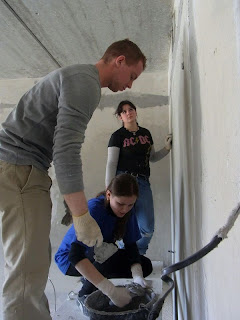 Aaron at work with two of the Russian student volunteers 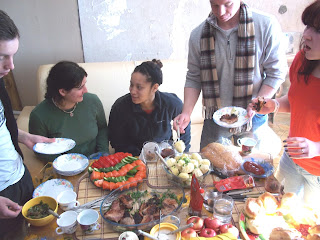 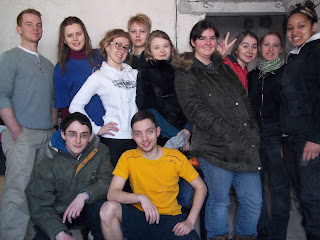 In addition to our volunteer work, we had a marvelous time visiting historical locations around Vladimir and Suzdal. Few Americans can say that they have traced the steps of Catherine the Great through the Golden Gates of Vladimir or stood in the place where the Mongols breached the city's defenses several centuries earlier.  In addition, for the first time in my life I went skiing in a small village outside Vladimir.  I fell a couple times, but it was definitely a memorable experience, in part because we enjoyed a wonderful "Russian barbeque" at the end of our cross-country ski. 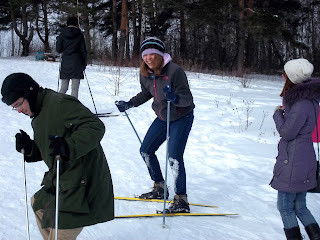 At the end of the trip, after saying many sad goodbyes, my host brother, Sasha, took me on a brief tour of Moscow before I made my way back to Sheremetyevo  airport.
I cannot adequately express my feelings as I stood in front of the iconic St. Basil’s Cathedral or as I
walked only a few feet away from the tomb of Ivan the Terrible inside the Kremlin. 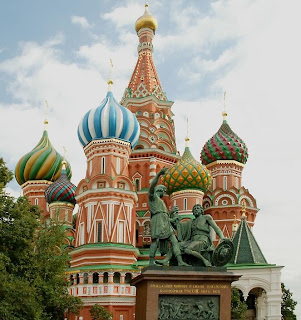 My time in Vladimir during Spring Break 2013 was one of my greatest life experiences. Not only because I was able to experience another dimension of this beautiful and mysterious land, but because I was able to initiate some great friendships. David Johnson did an excellent job taking good care of us as did our Russian host families and the other Russians we spent time with.
I highly recommend this program. But I must warn you that once you get a taste of Russia, you may very well be hooked for life!