SERENDIPITY AT WORK: The Russian Adventures of an American Lawyer

This past May I (Dr. Ron Pope) received an e-mail from Karen Porter, an American attorney in search of an opportunity to teach English in Russia. She had come across the American Home website and decided to contact me.

I am an American lawyer with 35 years of experience. I have worked for the past 20 years at an insurance educational organization writing books and preparing other educational materials of all kinds - such as these textbooks, The Legal Environment of Insurance and Insurance Regulation. I am also co-author of a popular textbook for law students, Legal Writing and Oral Advocacy. I have taught at Villanova University Law School and also teach courses in several venues on copyright law. Additionally, I was Assistant Dean for Graduate Legal Studies at Temple University School of Law, where I managed the comparative law program for foreign lawyers. I have attached my resume, which has more details.

I am planning to leave my current position within the next few months, but not planning to stop working. I plan to start a new career in teaching English, perhaps focusing on (but not limited to) professionals, particularly lawyers and other business professionals; and I saw your website. You evidently are doing exactly what I wish to do.

My son will graduate from Oberlin College soon with a double major in Russian and history, and he plans to study for a Ph.D. in Russian history. His experiences studying in St. Petersburg over the past two years have reawakened in me a life-long interest in Russia, and I am (slowly!) learning Russian now. He will be working in Moscow for 4 months in the fall (before going on to graduate studies), and I will visit him in November (my first trip to Russia). My plan is to obtain the CELTA certification for teaching English early next year, perhaps even taking that training in Moscow (or in New York, depending on many factors). Afterward, I would love to teach in Russia.

Would someone with my credentials be of possible interest to you next year? Or do you have advice for me? I think my professional experiences and skills would be immensely helpful in teaching Russians in business and other professions, particularly law.

My immediate reaction was that Ms. Porter would be an excellent resource person for the English program at the Murom Institute where one of their largest groups of students was in the law program.

Although Murom is older than Vladimir and the “home” of the legendary Russian “heroic warrior,” Ilya Muromets, because it was the site for a large number of major military factories, it was completely closed to foreigners during the Soviet period. Vladimir also had its share of military factories, but as the former capital of ancient Rus and as a member of Russia’s historic “Golden Ring,” it was not completely closed to foreigners. (The fact that it was necessary to go through Vladimir to get to the specifically designated “tourist stop” of Suzdal also undoubtedly contributed to the partial “openness” under the Soviet regime.)

In any case, after the collapse of the Communist controls Vladimir’s contacts with the non-communist world expanded significantly, in part through the development of Sister Cities relationships. Murom was not so fortunate. It was not an established tourist destination, and it did not attract the attention of foreign investors. However, two of the English teachers at the Murom Institute, Natasha Zhelinko and Lena Pankratova, made a point to contact the American Home with an offer to host visiting "native speakers of English." This led to arrangements for the first Fulbright group in 2004 to spend several days in Murom. The Institute staff and students almost literally "rolled out the red carpet." They informed us that we were in fact the first group of American teachers to ever visit Murom. Their hospitality was overwhelming. The Fulbright program teachers, some of whom were initially concerned about the value of spending several days in this unknown community, later acknowledged that this was one of most rewarding parts of the program. They felt they learned a great deal about the "real Russia" from the open and enthusiastic reception they received in Murom – and wished they could have spent even more time there than had been scheduled.

Needless to say, a visit to Murom became a regular part of most of our tour programs. In addition, we strongly encourage the American teachers in our English program to accept the invitations they receive to participate in the Murom Institute's English program's activities.

The Institute English faculty had hosted a Peace Corps member, but since that program ended had not had a resident "native speaker." I felt that Karen could nicely fill that void.

The reader can judge from the content of her diary whether or not my estimation was born out. 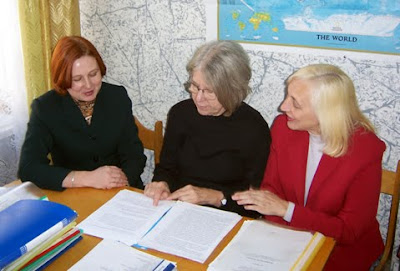