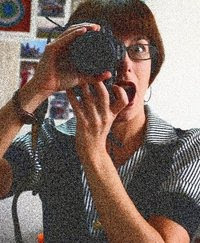 Jane taught in the English program during the 2005-2006 school year.

Following my year teaching at the American Home, I taught English in Daegu, South Korea (2006-2007) and in Bishkek, Kyrgyzstan (2008)... and I am once again teaching in South Korea, where I plan to be through July 2011.
Last fall I began volunteering my webmaster services to the American Home - setting up the AH Facebook Page as well as this blog, and completely redesigning the official webpage of the American Home.
As you might guess from my photograph, I am an amateur photographer. Over the past few years I've had several of my photos published in travel magazines, and I even had one featured on an episode of the TV show Without A Trace. My photos can be viewed at janekeeler.com if you're interested. I'm hoping for an opportunity to return to Russia - to Vladimir in particular - to take more photos!
Posted by annie at 12:32 AM